The ordinary and the sinister: New Nightjars by Claire Massey 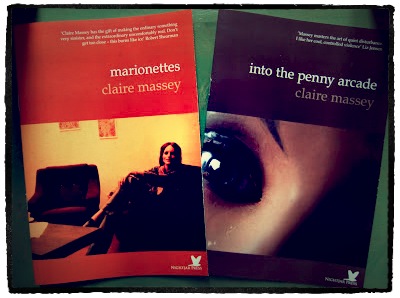 Claire Massey’s story Feather Girls in The Best British Short Stories 2012 was, for my money, one of the highlights of the collection. Which is why I snapped up a copy of each of the two new Nightjar titles, published in March, both of which are short stories by Massey; a first for the publisher. I fell for the air of dark fantasy that permeated Feather Girls, itself grounded in a fully realised and realistic backdrop and I was not disappointed to see the theme of transformation continues to be a focus for her in these two new tales.

Into the Penny Arcade is a suspenseful tale of a teenage girl on the run from bullies who seeks refuge in a strange lorry filled with penny arcade machines. Their curator, an overcoat wearing, ponytailed, grey haired old man, and his lorry full of antique machines seem at once real and unreal, a source of sanctuary and a source of danger. The suspense builds as the girl explores the machines in the lorry, forced to by the man’s insistence, Massey masterfully controlling both the character’s and the reader’s sense of dread right up to the story’s macabre conclusion.

In Marionettes a couple return to an unnamed city they have visited before, seeking out old haunts and finding only a marionette store they avoided entering the last time. The next day, the man, Karl, suffering from a hangover, stays in the hotel to nurse his self-inflicted wounds. The woman returns to the marionette shop to find what appears to be marionettes of herself and Karl hanging in the window. The couples explorations of the city grow more disturbing, detailing the impact of time upon their relationship while at the same time continuing to develop their growing unease regarding the marionette store. The ending, when it comes is chilling and has one of the most disturbing final lines I have ever read.

Both these stories, like Feather Girls before them, deal with the idea of transformation, of something dark and fantastic slipping into the very realistic worlds she creates and twisting the reality of that world.  Massey has a firm grip of what sorts of things fascinate and scare in equal measure and balances both those emotional states in the reader in these stories right up until their chilling climaxes. In the Penny Arcade and Marionettes sit well amongst the other Nightjar titles I have read so far, and I would go as far as to say they are amongst the very best short stories the imprint has so far published. In fact Marionettes is easily one of the best short stories I have read so far this year. I’m looking forward to the inevitable publication of Claire Massey’s debut short story collection. On the basis of what I have read of her work so far, it will be a cracking read when it emerges.

As ever, these latest Nightjars are beautifully produced chapbooks. I said in my last review how great it is to see a single short story afforded such focus and that opinion hasn’t changed at all. These are lovely objects as well as great stories. Both titles can be purchased from the rather spiffing new Nightjar website. I would urge you to do just that before the limited run of 200 signed copies are all snapped up. And grab some of the backlist titles while you’re there.