It would probably be easier to make a list of what Jodi Cleghorn doesn’t do than try to cover all the varied and exciting publishing related stuff she gets up to across the web. She is a founding publisher and editor with eMergent Publishing, the publishers of such short fiction goodies as the Chinese Whisperings anthologies and recent MLiSF guest Emma Newman’s debut collection From Dark Places. Most recently, Jodi has been the driving force behind two charity anthologies, 100 Stories for Queensland, a collection of flash fiction and Nothing But Flowers, a collection of apocalyptic visions inspired by the classic Talking Heads track.

Jodi was awarded the Kris Hembury Encouragement Award over the weekend, which recognizes an emerging artist in the area of speculative fiction. On a personal note, she has been a constant source of encouragement and a provider of keen perspective when beta reading my work. I am in awe of Jodi’s energy and commitment to providing support for up and coming authors. And she tells damn good stories. Ladies and gents, it really is a great pleasure to present Jodi Cleghorn’s Life in Short Fiction. 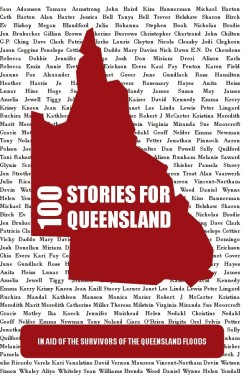 Flowers for Algernon caught my imagination as an eighteen year old, being bored to death in English Literature class at university. The story is both exciting and tragic, and I remember bawling my eyes out in the final pages as the ‘death of the new and improved Charlie’ is foreshadowed in the decline of his partner in experiments, Algernon the mouse. There is such tenderness and empathy in the relationship between house and human.

I guess it is no surprise that my main areas of interest in speculative fiction are the intersection between humanity and technology, with a real interest in the impact on medical ‘advancements’ to what it means to be and feel human.

2. The short story that turned you on to writing short fiction.

In 1991, for an English communications project at high school, I wrote a novel and submitted it to a publisher (I still have the entire project in a plastic box downstairs) David Kelly, an editor at Random House at the time, wrote back to me and suggested I turn my hand to short story writing (as well as suggesting some book on the craft of writing – the novel is pretty shocking!)

At the time I was incensed – who wrote short stories! Aged 17 I was acutely aware (somehow) that the short story was the poor third cousin to the novel, so why the hell would I want to write those? Ahh… if only I had seriously taken heed of the wisdom of Mr Kelly.

Thus, sadly I admit, to having fallen into short story writing, just because, rather than being enraptured by a single piece of writing.

I have reflected though on the fact I only read one short story at high school – Ray Bradbury’s All Summer in a Day (I still have the photocopied sheet with the questions at the end). While we were encouraged to write short fiction (and they made up a large component of our English syllabus, especially in the first 2/3rd of high school) we were never exposed to short stories as reading material. That weird dissonance, between what we were actually writing and what we were reading, carries on into my writing and reading habits today.

3. A story by the author whose body of work you feel has most influenced yours.

I came to writing short stories late. I came to appreciate the short story form late (better late the never, right?) While I write, edit and publish lots of short fiction, I’m slack when it comes to reading. Rage against the hangovers of the school system!

Thus, Dan, you my friend, are the most influential writer (and reader) in my life at present. That may change in the future, as you introduce me to more wonderful short fiction writers (and I stumble onto a few more all by myself) but for the time being – thank you!

Breaking all the moulds, I’m picking two – I’m declaring the fact I am a reader AND a writer as evidence to support my petition to pick two.

As a reader I still have a retinal-burn image, of the readerly variety, from the original Friday Flash version of Half-Mown Lawn. I was sobbing, my heart aching as I read that. You know it is good writing when you have a full body reaction to the text and it hangs around you for days after. It was such a joy to see it win the Yeovil Prize last year. Whenever I see an overgrown lawn, your story is the first thing to spring to mind – not what a lazy bugger we are for not mowing. But it also makes me fear Dave wandering out there to cut it – never shall I nag about long grass!

In terms of writing, Driver and The Highway has inspired me to be a risk taker with my own fiction and whether or not my current story comes off as planned… well, it was definitely influenced in form and shape by Driver. I’m pretty sure, I’m not the only writer you influenced with that story either! I still stand by it being the best literary mash up of Tarantino meets Mad Max!

4. The story from your own body of work that most reveals something of who Jodi Cleghorn is.

There is a little me or my travels through life, in every story – sounds so bloody clichéd doesn’t it? Anyone who knows me well enough will be able to recognise and follow the biographical crumbs littered Hansel and Gretel style. Even if it’s just a throw away reference of Bony M at Christmas! But which reveals the most about me?

It’s probably my yet to be published Graceville – an experimental piece written from the perspective of three main characters. Sarah-Jane is 17 and in love with a boy on the train, desperate to be noticed and desired by him. Her fantasies about him are time out from a family falling apart, and the stress and demands of final year exams. She’s a girl about to find her self growing up all too quickly. The women, Sarah-Jane’s mother and step-mother, are falling apart as the lives they envisaged don’t play out the way they hoped – at the centre of their disintegration, a brand new baby.

The core of the story comes from a sliding doors chapter in my life from about ten years ago. I guess it’s one way to explore, ‘what if?’

5. Your all time favourite short story.

Up until last year, Flowers for Algernon would have won hands down – not just because of the story, but because of the way it is constructed. The narrative consists of a series of diary entries which reflect the ascent and decline of Charlie and Algernon, in a way which is pure genius. It’s the only time you will ever applaud bad grammar and shocking spelling.

So what happened last year? I was entranced and horrified by Jack Marx’s Letter from a drunk to a long gone wife.  Again – this is a very personal narrative in the form of a letter. I remember realising I was not breathing, about halfway through reading it (in the 10 Stories You Must Read This Year 2009). Why? Because every time I believed the narrator couldn’t possibly sink any lower, he does. Time and time again. Twist by twist. Down, down… down! My love of Marx’s story signalled a new pas de deux with a much darker side of fiction.

If only I had realised the guy in the Stetson next to me at the bar in Byron Bay last year, was indeed Jack Marx; we may have spoken about something other than the travesty of being denied the right to order a pint of beer after 10pm in New South Wales and I could have congratulated him on being a twisted, genius of the macabre.

Jodi Cleghorn is a writer, editor and publisher. Founding partner of eMergent Publishing, she is the creative spark behind Chinese Whisperings and Literary Mix Tapes. Her stories fall into a number of different genres loosely yoked by the term ‘dark weird shit’ coined by her partner at a Christmas party in 2009. Her story “Kissed by the Sun” appears in the April-released Dead Red Heart. 100 Stories for Queensland and Nothing but Flowers are her most recent editorial/publishing endeavours. She lives in Brisbane with her ever patient partner Dave, son-of-a-million-questions ‘Mr D’ and a mad chook named Madame Houdini.

Jodi can be found here:

3 Responses to My Life In Short Fiction – Jodi Cleghorn