One too many swears? 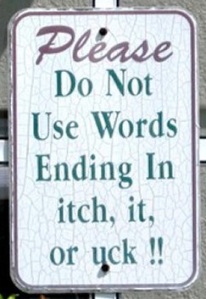 The news that Radio 3 is introducing swearwords into its adaptation of Wuthering Heights to give the book a more contemporary feel sounds like an April fool posted a week too early. The Guardian post on the subject pokes fun at the idea with a few choice classic lines edited for (bad) language, and the comments section is full of some excellent readers’ suggestion. I particularly like the rewrite of Jane Eyre suggested by kushti: ‘Reader, I fucked him,’ and Insidian’s rewriting of Keat’s as ‘That vase is the shit,’ had me laughing out loud.

The idea of the classics redrafted with added swearing got me thinking about bad language in one of my stories and whether I needed to do the opposite and remove the swears in it. As my beta reading friends will know I am not afraid of littering my work with swears if the need arises. I am however wondering whether a large amount of swearing in a short story puts people off.  My recent efforts to find a home for one of my stories, ‘Soiled’ has me thinking that the reason it is sitting unwanted and unloved (except by me) in my story file is down to the fact it has the most swears I have ever tapped into a single story. In fact, this story probably contains about 75% of my short fiction’s entire swear content.

It’s rejection has surprised me as it is a story I wrote while completing the second year of my Creative Writing diploma, during which it received pleasing feedback and (in conjunction with two other very successful pieces, both of which I have already placed) was partly responsible for my passing the course with a distinction in the second year. It has also been edited following advice from that most excellent of beta readers, Jodi Cleghorn. Yet everywhere I have subbed the story to has turned it down flat, which leaves me thinking maybe it’s not the story so much as the swears that are bringing the rejection hammer down on this baby.

My story ‘Half-mown Lawn’ has an f-bomb lurking in its sedate centre, positioned there for maximum effect. It is another of the stories I completed during my diploma and it went on to win last year’s Yeovil Literary Prize for short fiction. In preparing my entry last year I changed the f-word for to the less offensive ‘bloody.’ When I subbed the story to Ether books, who currently publish ‘Half-mown Lawn’ on their iPhone/iPod touch app I re-instated the f-word and they accepted it, leaving my wondering if its presence would have hurt its chances in the prize selection process at all.

In both ‘Half-mown Lawn and ‘Soiled’ the swearing is used to show a key element of each of my lead characters rather than gratuitously. The only difference is in the larger amount of swearing in ‘Soiled.’ Perhaps it is the fact that the story is a little over 2,000 words long and so the ratio of swears to total wordage causes readers’ hackles to rise; maybe over the course of a novel it would be more likely to be forgiven.The problem I have, if indeed it is the swearing that is causing the rinse and repeat rejections, is the removal of them breaks the story beyond repair.

Which brings me to my questions. Does a large amount of swearing in a short story put you off? Are there Brit centric literary fiction markets out there unafraid to publish a few fucks and shits?

2 Responses to One too many swears?