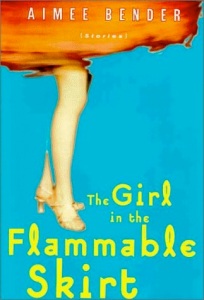 This section of the challenge was spent in the company of the lovely Aimee Bender and her collection ‘The Girl in the Flammable Skirt.’ Not sure what to say about this collection other than it is simply, unbelievably, wonderfully brilliant. Nik Perring often gushes about Aimee Bender on his blog and now, having read her debut collection and eager (so, so eager) to get my hands on the rest of her work, I can see exactly why. In an attempt to try and explain just what is so good about this collection, thought I might do a run down of my five favourite stories in the collection.

1. What You Left in The Ditch

A truly touching account of how sometimes someone coming home can be the worst thing in the world, What You Left In The Ditch shudders with emotion as the chasm separating Mary and Steven widens following his return from an unnamed conflict. The first line (like so many of Aimee Bender’s) is simple and powerful – ‘Steven returned from the war without lips.’ As the sad tale plays itself out we are shown exactly what else was left in the ditch when Steven was injured. This one had me choked up by the end, wishing for something to help the pair almost as hard as Mary does herself.

My favourite of the collection. A magical realist take on the effects of grief, we meet a couple, both recently bereaved, the husband having lost his father, the wife having lost her mother. He wakes up one day and finds a hole in his stomach, right through like a doughnut hole. She finds herself suddenly pregnant. What follows is narrated by their youngest daughter who watches everything with the clarity of a child. I won’t say more about the plot as it just gets weirder and more wonderful from this point on and any more details would spoil it. Oh and this deeply touching story has my favourite Aimee Bender metaphor in it:
‘…my father rested his hand on the top of my head – the heaviest, best hat.

A powerful use of interwoven points of view helps build this story to a frenzy of tension as the characters head towards cliff edges both literal and metaphorical. This story is a perfect example of how Aimee Bender crafts intriguing, attention grabbing openings and then delivers on them with superlative payoffs. If I take one thing from this collection as a writer, it will be the necessity to craft an ending that matches the promise of the stories opening.

Part fairytale, part family drama, this story weaves the two narrative styles together effortlessly, each one highlighting the other in revealing ways. The endearing first person narrator of the family drama is neatly counterpointed in the third person narration of the more fairytale elements of the story. And, on the subject of Aimee Bender’s skill with endings, the closing image of this story will break you heart.

5. The Girl In The Flammable Skirt

Another great first line, another wonderful metaphor; ‘When I came home from school for lunch my father was wearing a backpack made of stone.’ This is yet another heart rending story that manages to overlap imagery and narrative threads into a blanket that embraces you and tugs at your heart in equal measure. And yes, the ending is another corker. By the time you read this final story the themes of grief and impending absence permeating many of the stories are apparent. The richness and simplicity of the language in this collection grounds the stories in reality while simultaneously spinning reality into something altogether more magical. I shall certainly be reading more of Aimee Bender’s work.

Over this three day section I read the three Adam Marek stories currently on the Ether books app for iPhone, iPad and iPod touch; Tamagotchi, Without A Shell and If Dead Fish Could Blink. My review of Marek’s debut collection will tell you I am a fan of his work.

Of the three stories featured on the app Tamagotchi was easily my favourite. The story of a father struggling to save his child’s Tamagotchi pet that seems to have contracted AIDS is by turns amusing and heart-rending. The observations of family life and the pettiness of some parents at birthday parties and other gatherings are spot on. Marek deftly reveals the real core of the story as the plot plays out. What would have been a gimicky idea and little more in the hands of a lesser writer quickly develops into a portrait of a father trying to build a relationship with his son, something his son’s special needs make particularly difficult.

The other two stories are high concept and action packed, though they lack a little of the heart of Tamagotchi. That isn’t to say either story is bad as they clearly are the work of a quality writer, just that in the shadow of Tamagotchi they pale a little. That said, If Dead Fish Could Blink is stylistically powerful, the narrative voice panning and turning like a movie camera, shifting slickly from one image to the next as it relates the various elements in a foot chase along a canal. It has been said that prose cannot convey the drama of a movie car chase. I would say, on the basis of the control and tension exhibited in If Dead Fish Could Blink, Adam Marek just might be able to pull it off.