Over half-term, I took my wife away to Nottingham for a short break. She had always wanted to visit Eastwood, the birthplace of D H Lawrence, so we started by visiting the D H Lawrence Heritage Centre. The museum is small but really informative and seems something of a hub for local writing; my fellow Willesden Herald Short Story prize 2015 shortlistee, Megan Taylor, is due to lead a writing workshop there towards the end of March.

The hour my wife and I spent browsing the displays was informative and inspiring. The touch screen photo albums at the entrance provided an intriguing overview of Lawrence’s young life in Eastwood as well as branching out into the life he lead after he left his first home behind. There were loads of great touches to the rooms, such as window blinds decorated with Lawrence quotes, the bold lettering highlighted by the winter sun behind; various audio exhibits; and loads of displays covering all aspects of Lawrence’s life and writing. This one stood out as it described, in Lawrence’s own words, the importance of the view he looked out on from one of the handful of homes he lived in with his family in Eastwood. This description intrigued us enough to take a walk along Eastwood’s blue line trail to find the view itself and stand where Lawrence stood.

“If you’re in these parts again, go to Eastwood, where I was born…Go to Walker Street and  stand in front of the third house – and look across as Crich on the left, Underwood in front, High Park woods and Annesley on the right..I know that view better than any in the world…That’s the country of my heart.” -D. H. Lawrence.

Before leaving the Heritage Centre, we took the time to cast our votes in The Trial of Lady Chatterley’s Lover. I was a bit odded out by the fact that some folks seem to have voted for banning the books. Hopefully that was set up by the centre staff to reflect the way the issue divided people at the time of the trial rather than actual votes from visitors. 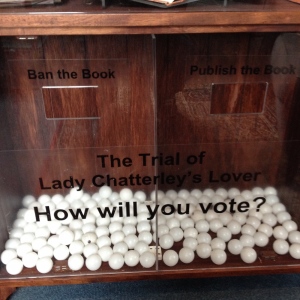 After a light lunch at the Heritage Centre’s bistro (which I would recommend) we followed the heritage blue line trail into Eastwood itself and took a tour around the house in which Lawrence was born. The Birthplace Museum is the actual house in which Lawrence was born and has been restored to look something like it might have at the time of his birth, complete with a few item that actually belonged to Lawrence’s parents. Our museum entry included an informative tour around the house, which was well worth the cost of entry and the time. 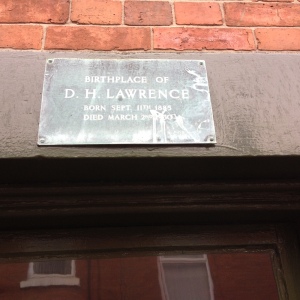 Following the tour we took a walk along the remainder of the blue line trail round to walker Street and the childhood view described by Lawrence and quoted on the display in the heritage centre:

I would heartily recommend a trip to the D. H. Lawrence Heritage Centre and the Birthplace Museum. I found the whole experience of our visit rather inspiring, not least when I stumbled across this splendid quote:

I love the bullish unwillingness to compromise that those words display. To me, placing the reader ‘in the thick of the scrimmage’ is exactly what writing should be about. I left Eastwood with a newfound respect for Lawrence. He is a writer whose work I have not read in over twenty years, but I have plans to rectify that, starting I think with Sons and Lovers or perhaps some of the short stories. Would any Lawrence fans out there care to recommend a favourite work that I should read?