Today, as part of the blog tour celebrating the paperback publication of That Dark Remembered Day, it is my great pleasure to welcome Tom Vowler to the blog. I have long been an admirer of Tom’s work. Back when I was in the very early days of writing the stories that became my debut collection, I read his Scott Prize winning collection The Method and other stories and was immediately struck by his ability to convey complex characters through the deft use of descriptive detail and action. It was on rereading some of my favourite stories in the collection that I started to appreciate just how carefully constructed they are. His short stories and his debut novel What Lies Within display a keen sense of how to best employ structure to serve the telling of a story. When Tom offered to stop off here as part of the tour, I knew which aspect of That Dark Remembered Day I wanted to hear about. Here’s Tom explaining the interesting and ambitious structure he created in order to tell the story of That Dark Remembered Day: 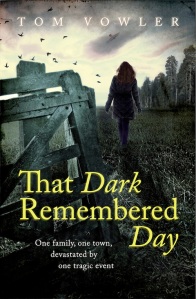 Along with point-of-view and tense, a book’s structure is something I like to pin down early on. That’s not to say it isn’t tweaked or even overhauled later, but without this architecture in place, I can find myself with too much freedom, the result perhaps a liberating and edgy piece of writing, though one whose shape is chaotic, its foundations shallow. Structure is so much more than a narrative device, a mere tool to carry the story; it can determine the reader’s psychic distance, create suspense, dictate rising and falling action, foster rhythms and levels of immersion. It coerces the reader emotionally, directs them, allows a precise exposition to occur as if the author were a film director.

With That Dark Remembered Day I wanted to recreate in the reader elements of the central character’s difficulties – in this case post-traumatic stress disorder following his return from war. With PTSD, hallucinations and flashbacks can cause the sufferer to experience a temporal blurring, where past traumas revisit the present with such clarity and precision that it’s hard to distinguish them from reality. And so not only did I resist a linear narrative throughout, but the section told by my former soldier jumps between his current life and his time on the battlefield with little or no signposts of this shift. By fragmenting the story chronologically, the reader, I hope, is witness to both a closer examination of this unhinging, but also to feeling a sense of disorientation themselves, manipulated to mimic some of the core symptoms of PTSD.

I’m a big fan of Mexican director Iñárritu’s films, his non-linear structure often giving the viewer a glimpse of some dramatic, devastating event, before rewinding to peel back the layers, giving us the why and how of the thing.

Of course the challenge was to do this while maintaining a compelling and vivid story, the structure achieving its aim on a subliminal level, one that didn’t detract from the felt world it created. If for a second the illusion of reality is broken, the writer’s technique visible, all is lost, the reader, as if learning how a card trick is done, ultimately dissatisfied.

Tom Vowler is a novelist and short story writer living in south west England. His debut collection, The Method, won the Scott Prize in 2010 and his novel What Lies Within received critical acclaim. He is co-editor of the literary journal Short Fiction and an associate lecturer in creative writing at Plymouth University, where he’s completing a PhD. That Dark Remembered Day is his second novel. More at www.tomvowler.co.uk.